Skip to main content and our Accessibility Statement may be found in the footer of our website.

The onset of the coronavirus pandemic was an uncertain time for workers in the food and beverage industry. Many went home from work unsure of when they would return. 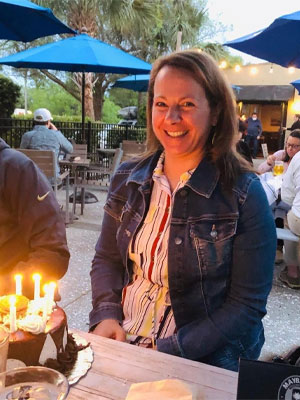 Paula Oakes was able to celebrate another birthday after getting treatment for colorectal cancer.

That was the case for Paula Oakes who lives on James Island. Her life slowed down quite a bit after leaving her fast-paced job as a bartender.

That also gave her more time to pay attention to how she was feeling. Not in a COVID-19 infection way, but she began noticing some changes in how her body was doing. Specifically, her gastrointestinal health.

She started realizing how frequently she needed to use the restroom. “I would eat something, and it would go right through me,” Oakes said.

She visited her primary care physician to talk about the new symptoms and was referred to Dr. Rya Kaplan, a gastroenterologist at East Cooper Medical Center. Oakes expected the symptoms were due to irritable bowel syndrome or another common gastrointestinal issue. Additionally, Oakes is lactose intolerant, so it’s common for her to have digestive discomfort.

Oakes went in for a colonoscopy and she said the procedure could not be completed because a cancer was so large. Oakes, who is 44 years old, received a stage three rectal cancer diagnosis.

Kaplan has already seen the benefits of lowering the screening age to 45.

“I found a couple cancers that probably wouldn’t have been found in early stages had they waited until the routine at age 50,” said Kaplan. Additionally, she has detected pre-cancerous polyps that could have turned into cancer by the time the patients reached 50.

Dr. Alejandro Suarez, a gastroenterologist and advanced endoscopist at Palmetto Digestive Health Specialists said there has been a recent increase in rate of colorectal cancer in patients between the ages of 40 to 49. “(There’s) approximately 10 percent of patients in this age range diagnosed with colon cancer,” Suarez said.

In many cases, the screenings find the cancer before the patient notices any symptoms. Kaplan said patients should be vigilant about any new symptoms, including changes in bowel habits, unexplained constipation, diarrhea due to blockage from a tumor, blood in the stool, abdominal pain or unexplained weight loss. These symptoms could be signs of other issues besides cancer, but Kaplan said it’s important to visit a doctor with any new symptoms.

Oakes was not due for a routine screening for a few years at the time she was diagnosed with cancer. After her diagnosis, she learned a couple of distant cousins had colon cancer, but according to the American Cancer Society a patient is considered at an increased risk if a first-degree relative (parent, sibling or child) has a history of colon cancer. The American Cancer Society states most colorectal cancers are found in people without a family history of the cancer. 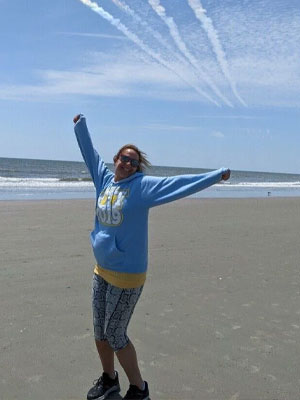 Oakes started treatment in August 2020 with radiation and chemotherapy pills. A couple of months later, she had surgery that removed the tumor and had an ileostomy bag put in, which she said was difficult to get used to. She had chemotherapy from December to April and once her body recovered from that, the ileostomy bag was removed in May 2021.

She said the chemotherapy made her feel exhausted and nauseous. She tried to get out of the house to go on a walk and keep her energy up. She said her support system of friends and family really helped her get through the cancer. Friends would check in with texts or stop by with a meal.

She said one difficult aspect of going through cancer during the pandemic is that she had to go to the doctor visits alone. Sometimes, she video-called a friend during the doctor visit to have some support, but she said the majority of the time she was by herself. She said her team of doctors and nurses supported and guided her throughout her treatment.

As a colorectal cancer survivor, Oakes encourages people to get screened, especially if symptoms arise. She said her advice for anyone with a cancer diagnosis is to reach out to friends and family for support because that is what got her through her cancer journey.

Kaplan said getting a regular screening is something that should not be ignored.

She said a colonoscopy is often a “hard sell” for patients because people are reluctant to do the prep and procedure. She said there are new preps that are smaller volumes of liquid and there’s a pill form. When it comes to the procedure, she said patients should not worry about discomfort or feeling anything.

After recovering from her final procedure in May 2021, Oakes started introducing light physical exercise into her routine to gain stronger. She said she is feeling well now and her colonoscopy a month ago showed “everything looked great.”